Join 92768 other members! Anybody can ask, anybody can answer. Consistently helpful members may be invited to become staff. Here's how it works. Virus cleanup? Start here -> Malware Removal Forum.

how to go online


8 replies to this topic

If you have pc with no o.s. , and want open source, how do you go online to get it? or do you obtain a cd? You probably by a pc with an o.s. and download and install the open source but I am unclear so please help.

May I presume you are referring to a Linux operating system?

If so, you can use any working machine with a connection to the internet to download your preferred flavor of Linux and burn it to CD or DVD.
Then install from that CD/DVD to your machine of choice.

You will have the option of selecting 32bit or 64bit on some flavors of Linux.

I was thinking of that then it dawned upon me that you cannot steal something that is free to begin with. I noticed it pointed out the bits recommending 32 for most users. Would that not depend upon your machine,or is the o.s. the 32 vs 64 bit factor not the hardware? Before I get too far down the road, can you buy a pc with no o.s.? I have had Dells asI can't build one and think it has some integrity compared with Compaq etc. That would help me decide whether to pursue it or not. I guess you can gather that we are doing a complete overhaul of our electronics. It is due to necessity as everything is as old as the turn of the 20th century.

New home cordless phones, fax, viewable media are done. Now we are working on smart phones and new desk and laptops.Ours are now 8 years old with xp. I think th xp o.s. is a great one but I have played with my daughter's Win 7 and it is fine. Byw, the 1+ 2T external drives are fine and have saved the day. Acronis and Macrium are good products but I lean to Macrium. Those with higher skills would prefer Acronis I think. Altho I wandered, I wanted to thank you for enlightening me about the open source o.s. and how is installed. 32/64 bit is the o.s. or the machine? I think the o.s. -?

Most systems manufactured in past 3-5 years can handle 64bit OS.
If you wish to become familiar with Linux OS you will be better off starting with a 32bit system because of ease and compatibility of utilities.

This is not something that can be instructed in a few Forum replies.
I'd suggest you study the Tutorials offered via the sites I linked.
Or consider the classic Tutorial offered by Bob Rankin... http://lowfatlinux.com/
By "study" I do mean study and put what you learn into practice, then study some more.

If you are looking for a more nearly "out of the box" experience with Linux operating system, consider one of the many Linux assembled Distros
Such as the one's I've already linked for you (Ubuntu or OpenSUSE 1.2) (don't go for the SUSE 1.3 at this time, since it is still being developed)

I've put Linux systems on some of my "older" machines, and while they have run as well or better than their previous Windows OS, it has generally been disappointing.

Most of us have grown used to substantially stronger/faster machines.
Putting Linux on an old machine will run it, but it won't make it stronger/faster.

To get started without the major expense of building/buying a new machine...
Consider just buying a new Hard Drive for one of your present machines.
Keep your existing HD with Windows and your saved data. Just set it aside.

Install a linux Distro on the machine with its now new HD.
Give it a test Drive.

I had no knowledge of open source but now feel there is no advantage over Windows or Mac. I add features to my list for the new pcs like firewire for my extrnal drive etc. We will probably get Win 7 (not sure of make/model). I will find a chart with the fiferences. I think we will go with 64 bit as I have learned that my all-in-one and camera can be upgraded to fuction with 64 bit. I understaand 64 bit does more faster. Phones are still in the air and the more I learn, the more I lean away from the Windows phone + towards an android os made by HTC perhaps. I just need to persist in stores about syncing, tethering, etc. Tethering is a company thing and T Mobile sounds good so far.

Yeah, I'm excited about all the innovations of mobile and cell phones. Here's the one that I finally selected for myself, since I can pretty much understand its technology. 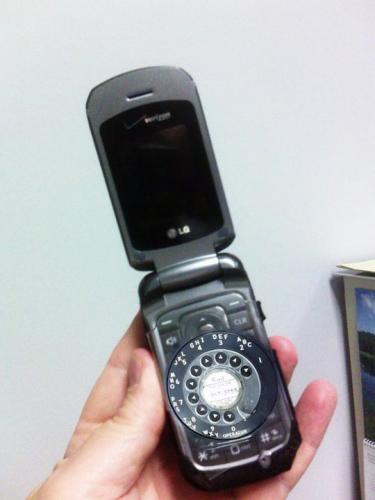 Yeah, I'm excited about all the innovations of mobile and cell phones.

Here's the one that I finally selected for myself, since I can pretty much understand its technology.

>>Hey, that dialer is my speed. My first phone had a thick black cord , spoke into one part and listened from another -my phone number had 4 digits and a neighbor named Claudia was the operator who listened to all the town's business.

Yep. I still remember my first 4 digit phone number. I remember lifting the phone and waiting for an operator so I could give the number I wished to be connected to. Mine was a "modern" black Bakelite desk-set with receiver and speaker in the same hand-set that rested on the cradle of the desk unit. Weighed about 12 lbs. There was no such thing as a spring coiled phone cord, but the thick cloth material didn't get tangled too much. Even after we graduated to the 7 digit number and dial phone, we still had a "party-line" shared with a neighbor down the street. Two distinct ring patterns, short and long bursts let us know which house was being called. Good luck with your techno-upgrading adventure. Best Regards

I'm sure we will talk soon. Thank you for your help. California and a 1/2 dozen pcs tells me you are in Silicon Valley. I used to visit my daughter in Palo Alto - Stanford Law. I boast about my 2 smart children but the reality is that they have two smart mothers.

Back to Open Source · Next Unread Topic →