Join 92790 other members! Anybody can ask, anybody can answer. Consistently helpful members may be invited to become staff. Here's how it works. Virus cleanup? Start here -> Malware Removal Forum.


43 replies to this topic

Sorry I didn't get around to running the 2nd scan - it was just too frustrating listening to the drive churn and the delay in getting anything to load...I will do it tonight before NCIS comes on!!

I tried typing this note while the XP was doing that Eset scan....but it simply cannot multi task........gawd help me!

I'm on my hubby's tower in the same room now.  and to answer your question about the XP booting "choppy" the answer is yes.  It didn't used to do that..this is new.

Is there a virus/trojan/worm on it now?? I should of left well enough alone......

After you are done with the check up..I'm pulling the internet cable out of the back..it's never gonna see the internet again!!!

anyway, after it booted, I clicked on firefox at 7:11 pm, I brought up the task manager and under processes it has firefox listed at the top of the list, and it's a 23,000  firefox has not loaded yet, and won't for 4 minutes..but this figure continues to grow larger.  At about 68,000 firefox loads a blank page after3 minutes...then www.whatthetech.com finally loads.

Ok thanks.  As for it contracting a virus while we have been doing the scans it is doubtful....  Let's see what ESET finds.

this took 5 hours to run.  here is the log.dar

How is your system running right now?

For some reason it is not "choppy" tonight.....Now it seems to be slow, like it's supposed to be for a 2003 HP with XP.  Is there anything we can do give this system a "boost" or is this as good as it gets?

Can you tell me after this check up, how is it?  Did we find anything bad?  If so, is it gone?

Good to hear it seems to be running better.  As for slowness there is not a lot that we can do for that unfortunately.

We did find several "junk" entries that we removed.

Yep I'm here.  I have a personal day today - so going to spend time in my sewing room today, if I can get my grandson to go home with his mother!!!!

Providing there are no other malware related problems...

IT APPEARS THAT THE LOGS WE HAVE NOW ARE NOW CLEAN!  GREAT JOB!!

This infection appears to have been cleared, but I can not give you any absolute guarantees.  As a precaution, I would go ahead and change all of your passwords as this is especially important after an infection.
----------


The following will implement some cleanup procedures as well as reset System Restore points:

Press the Windows key + R and this will open the Run text box.  Copy/paste the following text into the Run box as shown and click OK.
Combofix /Uninstall
(Note: There is a space between the ..X and the /U that needs to be there.) 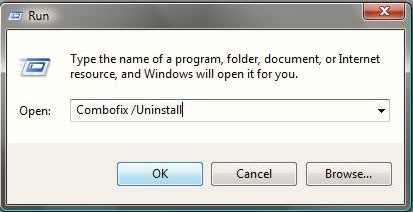 Any of the logs that you created for use in the forums or remaining tools that have not yet been removed can be deleted so they aren't cluttering up your desktop. If you did not have Malwarebytes Antimalware before, I would keep it and run it weekly.
----------

Here are some tips to reduce the potential for spyware infection in the future:

1. Make your Internet Explorer more secure - This can be done by following these simple instructions:

thanks for all your help Jeff!!

I have already unplugged it from the internet, its no longer on the home network.  so chances of future infections are greatly reduced!!

thanks for your help!

Have a great Easter!

You have a great Easter as well.

Since this issue appears to be resolved ... this Topic has been closed. Glad we could be of assistance.

If you're the topic starter, and need this topic reopened, please contact a staff member with the address of the thread.

Everyone else please follow the instructions here http://forums.whatth...ed_t106388.html
and start a New Topic.

Back to Virus, Spyware & Malware Removal · Next Unread Topic →